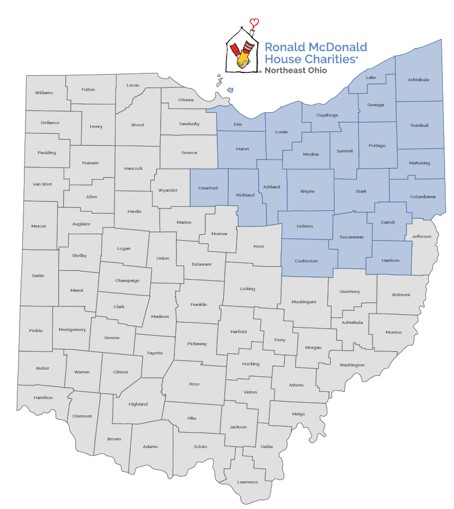 What organizations were involved in the formation of the new Ronald McDonald House Charities of Northeast Ohio?

Northeast Ohio was a leader in the movement, opening the ninth house in the world in Cleveland in 1979, followed by the Akron House in 1985. Northeast Ohio also established the first Charities chapter in Ohio in 1988.

During the following decades, organizational structures, missions and names evolved. As new chapters were formed nationally and internationally, they tended to be the organizations operating core programs such as Ronald McDonald Houses and Ronald McDonald Family Rooms.

Why was a merger explored?

RMHC, Inc. (Global) has been encouraging all unmerged markets to explore whether pooling resources into a unified chapter will better serve families.

How was the decision made? What are the benefits?

The decision to form one organization was made after an 18-month study by a joint task force of representatives from boards and staffs of the four affected entities. The study and discussions, facilitated by Business Volunteers Unlimited (BVU), concluded that combining into one organization could increase efficiency and serve more families throughout the region. Upon review of the task force recommendations in early 2020, boards of the affected entities voted to merge.

The single organization leverages the combined talent, resources and community support of the original organizations to better address the needs of families with ill and injured children receiving medical treatment throughout Northeast Ohio.

Was COVID-19 a factor in the decision to merge?

No. The exploration and feasibility study began in early 2019 and was completed before the COVID-19 pandemic began.

When is the merger effective?

Will donations be able to stay local?

Donors, partners and groups may continue to support specific programs or locations, the larger entity or regional initiatives as they choose. Local fund development and stewardship efforts are in place for the northern and southern regions of the territory.

Will programs or staff be cut as a result of the merger?

No. Programs of the original organizations are continuing to operate and staffing levels are being maintained and/or increased as needed. The new structure better positions the organization to manage and expand programs to serve families where needed throughout Northeast Ohio.

What programs are being operated?

What territory is covered by the new Chapter?

Families served, however, include Northeast Ohio residents as well as those who come from across the state, region, nation and world to receive medical treatment for their children in Northeast Ohio.

How does the merger affect funds raised at local McDonald’s restaurants?

Formation of a single, merged organization streamlines the flow of donations from McDonald’s local restaurant customers to support RMHC NEO programs throughout Northeast Ohio. Read more about our relationship with McDonald’s.

Will community grants to other Northeast Ohio organizations still be given?

Has the mission changed?

The new Chapter’s mission statement reflects the missions and services of the original organizations. The mission of RMHC NEO is to enhance the healthcare experience for families and children through comfort, care and supportive services.

Who leads the organization?

How will the new organization be governed?

A subcommittee of the joint task force developed and vetted a board governance plan to provide opportunities for equal representation from each of the original entities as well as local community stakeholder involvement. The volunteer leadership structure includes a Board of Directors with Standing Committees and three Community Trustees/Advisory Council groups representing Greater Cleveland, Greater Akron/Canton and Greater Mahoning Valley.