Posted at 15:30h in Stories by MissyToms 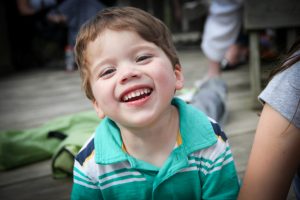 Chris and his wife, Amie, knew something wasn’t quite right with Ryan. At age one, he was not developing at the same pace that his big sister, Sadie, had. He wasn’t reaching typical milestones like crawling and pulling himself up. Ryan’s physical therapist suspected he may have Cerebral Palsy, which his doctors later confirmed.

Despite intensive physical therapy, Ryan’s physical progress plateaued, and he began to regress. The Delavegas learned of a doctor in St. Louis who performed a special surgery that might help Ryan. Without the surgery 5-year-old Ryan, who can walk short distances with the assistance of a walker, would eventually be wheelchair-bound.

I really can’t say enough great things about our St. Louis Ronald McDonald House experience. The ability to leave the hospital for a shower in peace, sit and relax, and grab a meal was priceless. The community meals were a great place to vent, learn, and understand from other parents just how challenging and fortunate some have it. You know, I can’t remember what I ate yesterday, but I still remember those dinners and the conversations.

And the best news! Since his December surgery, Ryan has made remarkable progress. His muscles and joints are more elastic. He is able to stand on his own and has been taking his first unassisted steps. Despite a long journey ahead of them—four years of physical therapy 10 hours a week—the Delavegas are excited and encouraged that Ryan will someday be walking and jumping.

Without donors, Ronald McDonald Houses cannot help families be near their children during unsettling times. You ensure that the Ronald McDonald House of Cleveland is ready and able to help these families during their time of greatest need…no matter where they are from. Help us continue to serve our families.