Putting Down Roots at the Garden House

Home / Stories  / Putting Down Roots at the Garden House

29 Oct Putting Down Roots at the Garden House

Posted at 12:20h in Stories by Sydney Emerson 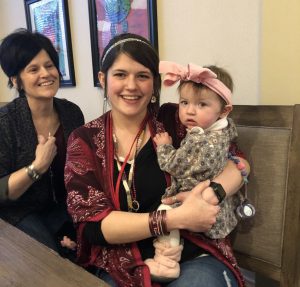 At fifteen years old, Morgan Miesse had a stroke. What followed next were years of complex conditions—gastroparesis, hemophilia, Ehlers-Danlos syndrome, dysautonomia, postural orthostatic tachycardia syndrome—all of which had been lying dormant until triggered by her stroke. In the almost three years it took for Morgan to receive diagnoses, she was sucked into a whirlwind of doctor’s appointments and treatments—all hours away from the Miesse family’s hometown of Celina, OH.

The beginning of the family’s journey was tough. There were times when Audrey, Morgan’s mother, would sleep in her car, not knowing what her next real meal would be, consumed with the care of her daughter. Morgan would share her hospital meals with her mom, watching as Audrey refused to take any more than morsels, insisting that she wasn’t hungry—though the look on her face disagreed. Audrey would sometimes leave the ICU in tears as she said goodbye to Morgan before changing in the parking lot and driving home to go to work, medical bills making time off an impossibility. Aside from missing basic self-care, Audrey and Morgan were also missing that all-important force that provides strength and joy in difficult times: family.

Enter: Ronald McDonald House. The Miesse family’s first stay was in 2011. They don’t quite remember how they discovered the House—perhaps a friend or nurse referred them—but that doesn’t matter to them. All that matters is that they found their second home in Northeast Ohio. As Audrey noted, after staying at the Ronald McDonald House once, they knew they could never return to their old ways of sleeping in cars and trying to afford a motel room.

At the beginning of Morgan’s illness, there were times when they had to rearrange appointments as no rooms were available at the Ronald McDonald House. They remain grateful for the 2013 expansion of the Cleveland House, which ensured that there was always enough space for them to stay when visiting the hospital.

It’s often that you hear the virtues of the Ronald McDonald House from the parent’s perspective—food, laundry, safety, support, a bed at night, and a shower in the morning. All too rare is the patient’s perspective. Morgan, for one, was extremely relieved. Now that she knew her mom was eating and sleeping regularly, she was able to focus on her own healing. What’s more, both Audrey and Morgan found lifelong friendship and support at the house—an extended family that faces the same challenges they do.

In 2017, Morgan and Audrey had just left a difficult appointment. After talking to Morgan’s ophthalmologist, their fears were confirmed—Morgan had lost a portion of her vision in her right eye due to a brain bleed. The missing part of her vision would never return. “We had been bawling. I mean, we were really upset,” Audrey shared. 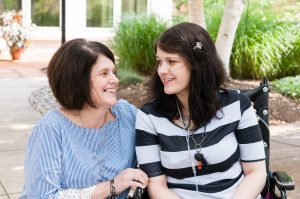 Upon their return from the hospital, they visited the peaceful gardens of the Cleveland Ronald McDonald House—also known as the Garden House. There they met photographer Jennifer Tacbas, who offered to take their portrait amongst the flowers. The Miesse family treasures those photos—those snapshots of joy during such a tough time in their lives—to this day.

These days, Morgan finds herself in the unique position of being both patient and parent. Despite a high-risk pregnancy, Morgan’s daughter, Victoria—known within her family as “our little miracle”—was born in December 2018. The family tree grew.

I never thought, as a patient, that I would become the mother of the patient. That was rare.

It became clear soon after Victoria’s birth that the family needed the Ronald McDonald House more than ever. Born with gastroparesis, Victoria required specialist care that necessitated more travel for appointments. Morgan was now closer with her mother than ever—“I never understood [my mom’s] pain until I was put in the position of watching Victoria be taken back for a procedure. I had been the one in the bed;  I didn’t know the pain that the parent felt. And I can honestly say now that it is miserable.” Now legally blind, she juggles both appointments for herself and Victoria during their visits—appointments which rarely align without some difficulty.

And yet, there is community. There is hope. After twenty-two visits and counting, the Miesse family has put down roots at the Ronald McDonald House—three generations now visiting at once as Audrey steps into her new role as both mother and grandmother.

The friends that Morgan made at the house are now honorary aunts to Victoria. When they arrive, the staff is ready with a room and a meal. “It’s a place away from home where we can still feel at home;” somewhere they can breathe a sigh of relief and take a break during their still-unfolding journey.

The road ahead is long and bumpy—it’s becoming harder and harder to coordinate Morgan and Victoria’s appointments and medical costs can be overwhelming—but the Miesse family can rest easy knowing that, thanks to generous donors, the Ronald McDonald House will always be ready, doors open.