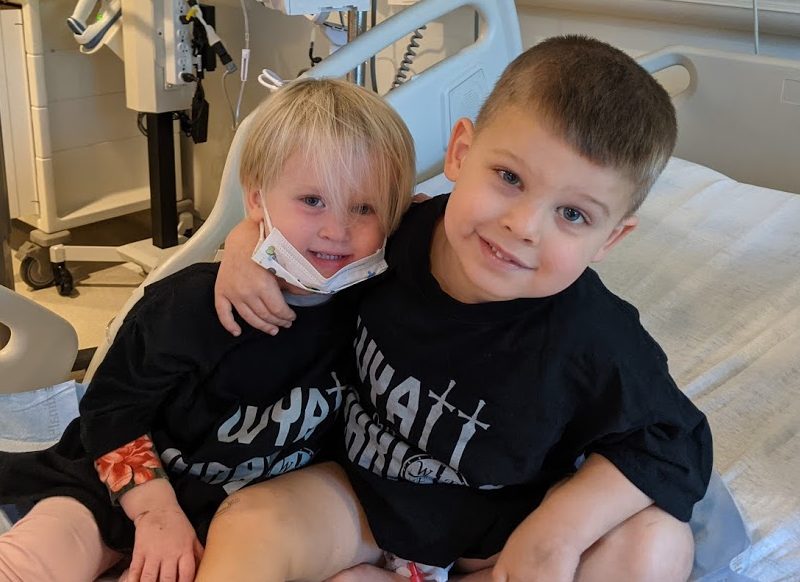 07 May Wishes for Wyatt

Posted at 12:25h in Stories by Colleen Cronin

How a hero, a hospital and a House made them come true

Thumbs up for Wyatt!

Four-year-old Wyatt Brown is an active kid who loves running around, climbing and exploring with his little sister Evie (Evelyn). A few bumps aren’t unusual, but this past August he began having a lot more bruises than normal. His concerned parents, Jesse and Lisa, showed Wyatt’s doctor, who suspected a blood disorder.

By October, Wyatt was diagnosed with severe aplastic anemia. His bone marrow was failing and a transplant was the only way to save his life. At this point, the Browns were travelling overnight twice a week between their home and the hospital so Wyatt could receive blood and platelet transfusions. The search for a match began.

It was really hard. One of us would be home with Evie and one at the hospital and then we'd switch. When one's here and one's there, you don't have the support of each other to lean on.

Hugs from his hero

They didn’t have far to search; despite only a 20% chance, two-year-old Evie was a perfect match. Planning for the transplant kicked into high gear. Wyatt would have to undergo chemotherapy, stay in the hospital for several weeks post-transplant, and then be close to the hospital until he was well enough to return home. Evie would also require care and the Browns needed to be together.

Where could they stay that would keep them safe from COVID-19 and accommodate all the other precautions needed to protect Wyatt’s weakened immune system?

Jesse readies Wyatt for his procedure

The Browns arrived at the Ronald McDonald House on Thanksgiving Day. That very weekend, Wyatt received his life-saving bone marrow transplant from Evie, whom the family now affectionately calls “Wyatt’s Hero.” Wyatt spent the next few weeks in a germ-free room at the hospital and was able to rejoin his family at the Ronald McDonald House just in time for Christmas. Staff made sure the holiday was extra special with decorations and lots of gifts for the kids to open.

The staff has stepped in and become our family and friends… Even when you’re having a bad day, they’re cheering you on.

Staying together at the Ronald McDonald House

Over the next few weeks, the Browns had to carefully protect Wyatt’s weakened immune system. In addition to strict COVID-19 protocols at the House, the staff took extra care to tend to his needs, even setting aside food items that fit with his dietary restrictions. As Wyatt continued to recover, his rambunctious spirit returned and soon he and Evie were laughing throughout the House, something staff called “music to our ears.”

In February, the Browns returned home after ninety-one nights at the House. Wyatt is now thriving and enjoying life with his hero Evelyn. While life slowly returns to normal, Lisa and Jesse remember their time at the Ronald McDonald House fondly, and with deep gratitude for being able to be together when it mattered most.

I don’t think you’ll ever realize how much it means to each and every family here to have this space. You wanting to help families like ours is more meaningful than you can know.

Happy at home and doing well.

Watch the Browns tell their story and learn more about Wyatt, his hero Evie, and what the Ronald McDonald House means to them.

Your gift today helps families like the Browns, each and every day.