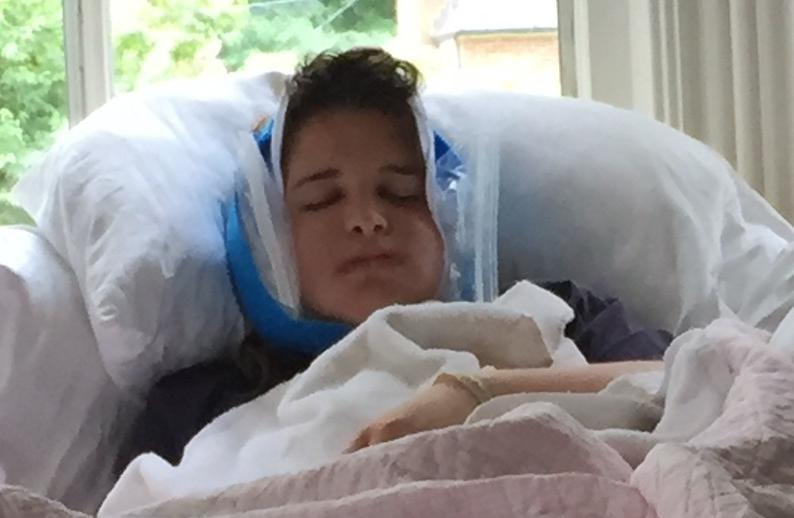 Posted at 15:34h in Stories by MissyToms

Last July, my 16-year-old daughter, Morgan, was admitted to the hospital to have double jaw surgery to correct an underbite. For a few years my wife and I held out hope that something might change and the orthodontist would tell us that the surgery was no longer necessary. But over time it actually became more pronounced. On the advice of several doctors and orthodontists, Morgan made up her mind that she would have the surgery in late June after school was out for the summer.

We arrived at the hospital at 5:30 am on a clear Wednesday and got her admission started. Everything went smoothly, and by 8 am she was prepped for surgery.

As much as we’d prepared for this day and applied logic and rational thought to the need for this procedure, I hadn’t planned for the emotion I would feel when they wheeled my daughter away on the gurney. I literally thought to myself, “I wonder if we’re making a huge mistake.” It felt like the medical equivalent of buyer’s remorse.

As any parent of a child in the hospital can tell you, the next five hours passed painfully slowly. We tried to distract ourselves with magazines and conversation, but my wife and I felt overcome with anxiety. While we got regular updates from the staff that the surgery was proceeding well, we heard few details and were left to imagine worst-case scenarios.

At about 2 pm, we were summoned to the recovery room where we met an incredibly kind nurse named Dee who would look after Morgan, monitoring her vital signs and pain levels for the next four hours. Morgan’s entire face was dramatically swollen from her eyes to her chin. Blood and saliva trickled from her mouth as evidence of the severity of the surgery. Morgan would wake up for just a few seconds at time and only had enough energy to blink her responses to us.

Later that evening, she was given a bed on the 8th floor of the hospital where she would spend the next two days making further recovery.

It was during these days that I gained a first-hand appreciation for the difficulties faced by families of children in the hospital. I noticed a few things had changed in my perspective. Among them were:

We were fortunate that Morgan’s surgery was done close to home, only about 20 minutes away. As a result, we elected not to use Ronald McDonald House of Cleveland services in the hopes that another family, perhaps in a more difficult situation, could benefit.

Despite the fact that we didn’t stay at the house, we reflected a number of times on how beneficial the availability of RMH is to the families who stay there. Having a child in the hospital is emotionally exhausting, and the last thing parents want to have to do is find a place to stay near the hospital their child is in.

After returning home from the hospital, Morgan continued her slow recovery at home. She was restricted to a liquid diet for three weeks while her mouth was wired shut to limit the movement of her jaw.

After four weeks she was cleared to eat soft foods, and she slowly regained nerve sensation in her face. The swelling didn’t completely subside for another few months, but each day she had a little more energy and is now completely recovered.

The events surrounding her surgery this summer have taught us all a number of valuable lessons. Considering all we’ve learned, we’re more anxious than ever to continue our support of Ronald McDonald House. Please join me and donate today.